In ancient Roman religion and myth, Janus is the god of beginnings and passages; gates, transitions, endings and duality. He presided over the beginning and ending of conflict. General speaking, Janus is at the origin of time guardian of the gates of Heaven and holds access to Heaven and to other gods.
Since movement and change are interconnected, he has a double nature, symbolized by his two headed image. This two headed face insinuates a beginning and ending, as well a future and the past. With one face he sees into the past and with the other into a future. The two faces can’t continue without each other, they are forever connected with each other, like life and death.

According to studies of the memorial ensembles of Latvia, across the territory of Latvia, there have been found ash urn cemeteries in the period of the 1st millennium BC. Up to the present day, ash type burial sites in Latvia are called cremation graves. In the past, grave sites were landscaped with typical Latvian farmsteads cold-resistant flowers and small flowering greenery. These old cemeteries are based on the idea of a passage through circles of thoughts and feelings. Diversity of moods are created by light, flowers, trees, sculptures and performing drama.

Life and Death are fundamental parts of human existence. Death can’t exist without life, they will remain connected forever. The separation between the beginning and ending of life, and the passage of the deceased are essential for the Columbarium Janus. The Columbarium consists of a wall that symbolizes the duality between life and death, connects both of them but in the same time also separates them. The side of death is related to a circle element with an alluring tree, symbolizing the beginning of a passage of the deceased to an heaven.
The composition of wall, path, sitting area and the tree, generates a contemplation of a passage through the circles of thoughts and feelings. One side of the wall, the side of life, has a polished surface of stamped concrete, reflecting and confronting (your own) life, while the side of death, the other side of the wall has a rough surface. 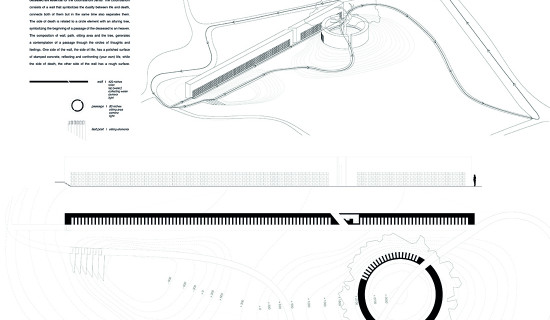